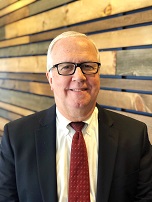 The award honors a league employee who demonstrates visionary leadership at the state and national levels.

Ken humbly addressed the group, “46 years is a long time, but I still have the same kind of enthusiasm and I had back in 1975 when I started… Knowing that we have a small part in helping [members] financial lives through credit unions…that's the kind of thing that has made the longevity not seem long at all.” He added, “I am so thankful to have had a career that's been touched by so many wonderful people.”

Watt’s career at the West Virginia Credit Union League began in 1975, as a league consultant, making 2021 his 46th year of service with WVCUL. He subsequently held the positions of marketing director, director of education, executive vice president, and was appointed League President in 1989. With a small but mighty staff, Ken efficiently and effectively serves the credit unions of West Virginia by continually delivering strong financial performance for both the League and the League Service Corporation, while also maintaining over a 93% affiliation rate.

“Ken is seen by credit union leaders and League staff as a model of honesty and integrity. His leadership style promotes fairness and integrity in all facets of the organization,” praises Charles Elliott, president/CEO of the Mississippi Credit Union League and 2020 Farley Award Winner. “His consistent actions have set a tone and an example which others strive to emulate.”

“It is an honor to present this award to Ken. Throughout his career, Ken has focused on cooperation within the credit union system,” praises Diana Dykstra, AACUL Chair and President and CEO of the California and Nevada Credit Union Leagues. “He is a champion of ‘cooperation among cooperatives’ which benefits credit unions not only in West Virginia but throughout the entire movement.”

“Ken’s cooperative ventures are vast,” shares Fred Robinson, president/CEO of the Tennessee Credit Union League. “Some highlights for me include Ken being a founding Director of the Mid-Atlantic Regional Service Corporation; being a founding member and Director of the TR Group; partnering with the Colorado League and later Illinois to provide card services to credit unions in West Virginia; leading the effort among Leagues (formerly in) NCUA Region II to promoted a dialogue exchange with the chief regulator in face-to-face meetings which resulted in a better understanding of credit unions’ priorities and examination concerns; and working with the Ohio Credit Union League in bringing shared branching services to West Virginia.”

AACUL Executive Director Brad Miller notes, “Ken’s leadership, service, and contributions to West Virginia credit unions and the entire credit union system are remarkable and very much appreciated. This includes being a catalyst in mentoring the next generation of leaders through programs and scholarships Ken has established to advance young professionals.”

Watts has served on many key industry groups including the CUNA Board and the CUNA Small Credit Union Committee. He currently services on the AACUL Political Involvement and Grassroots Committee. Ken was honored as with Credit Union House Hall of Leaders award in 2020. He also has the rare distinction of being recognized by CUNA as a Credit Union Founders Club member for organizing several credit unions.

His volunteer service outside of the credit union system demonstrated his compassion for the less fortunate though his participation on the board of the Volunteer Action Center and Community Resources Inc.

As a past board member of the Mid-Ohio Valley Chamber of Commerce and current member of their Government Relations Committee, Ken is a visible representation of the cooperative philosophy that credit unions espouse.

Upon hearing the announcement, Robert N. Trunzo, President & CEO of CUNA Mutual Group offered his congratulations. “Ken’s commitment and leadership at the West Virginia League and throughout his tenure has made a real difference in helping credit unions across the system flourish and continue to meet the evolving needs of their members. Congratulations, Ken, on earning the Eugene Farley League Leadership Award. Well deserved.”